Goatscaping 101: My Experience with a Herd

Group photo of the herd – photo by Lindsay Nixon

With over one acre of untamed woods in Dexter, my wife and I have been on a mission of taming Poison Ivy and invasive Buckthorn. We have cut, pulled, hacked, and dug for the past two years but never seemed to get ahead. My father even drove his 1940s Farmall H from Saline to help us pull Buckthorn out by the roots. A new solution was needed.

This spring, I wrote a story about a CSA farm in Chelsea, which I stopped at one afternoon. While on a guided tour of the farm, I noticed the goats climbing into the bushes and was informed they eat invasive species of plants, shrubs, and poison ivy. Ah ha! Maybe that would solve my problem; the issue is I don’t have a farm, so how do I end up with goats on my property.

Enter Twin Willow Ranch in Milan, with farmer Mike Daum and his son Doug. They have been running teams of goats since 2012, providing brush control for the City of Ann Arbor, the residents of Washtenaw and Lenawee Counties, and traveling as far north as Frankenmuth. After Doug read an article about a similar business model in California, they decided to try it. What started as a way to supplement the farm’s income has now turned into a thriving business that keeps the father and son on the move seven days each week.

Goatscaping is straightforward once they survey your property to determine if the goats would prove beneficial. Armed with a machete and rolls of portable electric fencing, Mike and Doug hacked their way along the intended border and placed the fence, which is powered by a simple marine battery. After leaving a 40-gallon water tank and some grain, the duo released 11 goats from the trailer to the woods and said goodbye for a few days. The goat teams, which typically consist of ten goats, work through October before returning to the farm in Milan during the winter months.

Aside from the laughs and entertainment, the goats went right to work and mowed down the first section within five days. In fact, they mowed down so much that they decided to stretch over the fence to greener pastures causing the fence to fold and triggering a goat escape. It turned out to be exciting times for our family and neighbors as we attempted to herd and coax the goats back into the fencing. With a phone call, Mike and Doug were quick to arrive and reset the fence to the new area the goats would focus on for the rest of their stay.

After eleven days of work, the goats were picked up and headed to their next job site. Sitting on our deck watching the herd feed on invasive trees had been a relaxing evening activity; so needless to say I was going to miss the unique animals. My wife on the other hand thought it was a crazy idea, to begin with. Although she warmed up after surveying the work they had accomplished, my idea of purchasing a couple of goats from Mike and Doug was ultimately vetoed.

On the operations side, the goats receive all the nutrition and water needed from the brush they consume while grazing. The cost of a goat is $5 each day; affordable for the amount of labor and frustration they saved us. A majority of the clients live on steep, overgrown hills where a goat can casually stand and feed, but humans would struggle. Depending on your property size, there is a five goat minimum charge due to the work that goes into the process.

Choosing between the goat adventure or listening to chainsaws and other equipment attempting to complete the same task, we decided the goats were much more enjoyable. People say you shouldn’t own anything that eats while you sleep, but in this case, I’d give it two thumbs up.

For more information email twinwillowranch@gmail.com or visit their Facebook page. The goats are busy making their rounds, so it’s best to get on the list early. 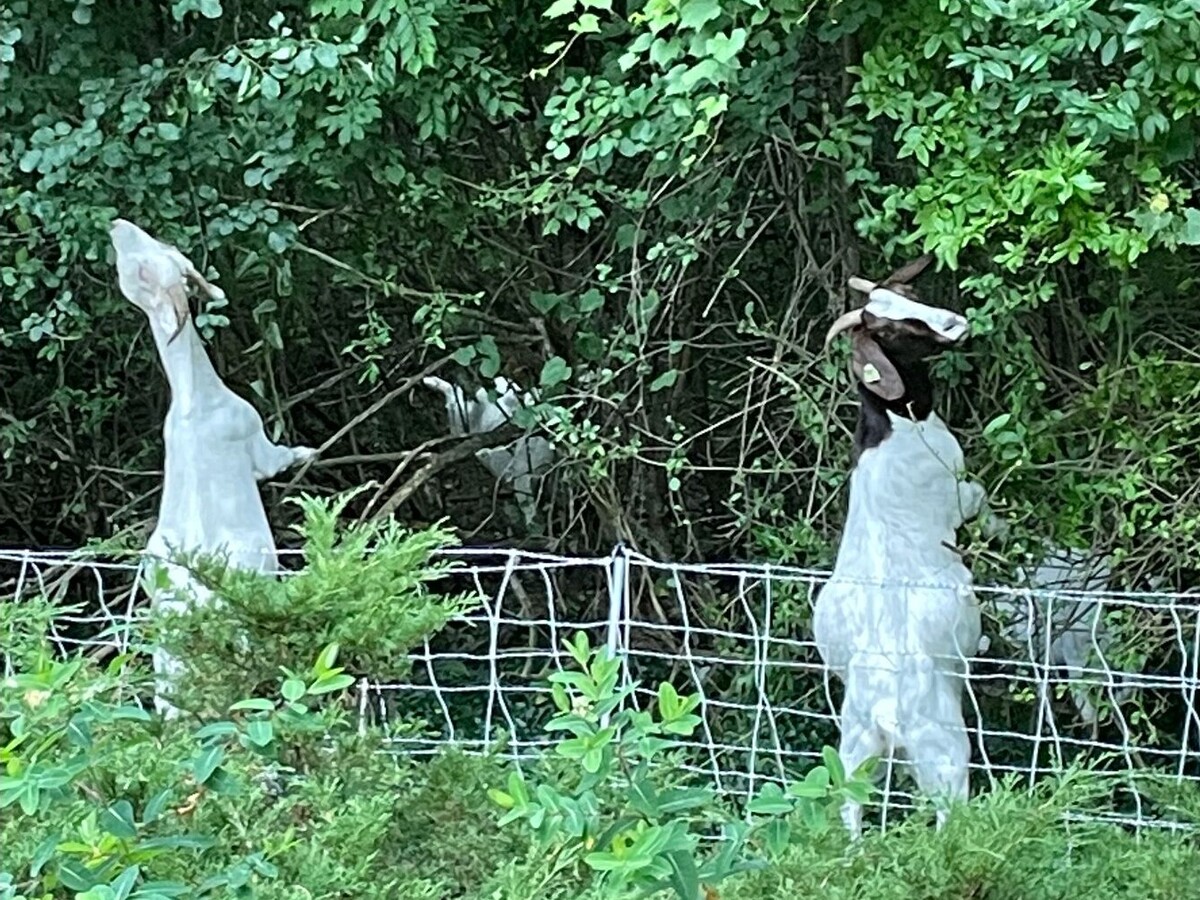 The goats standing up to eat – photo by Andy Nixon 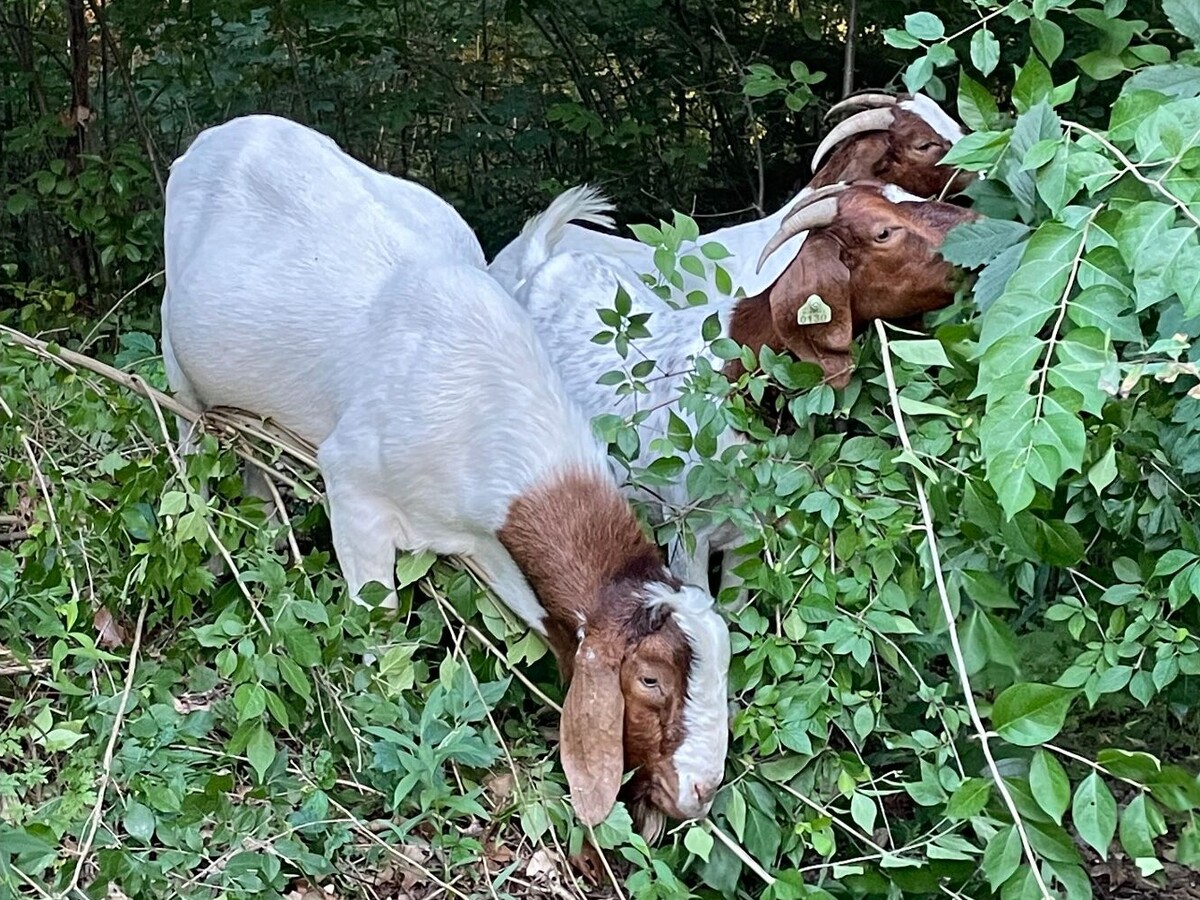 Munching on a bush, day 1 – photo by Andy Nixon 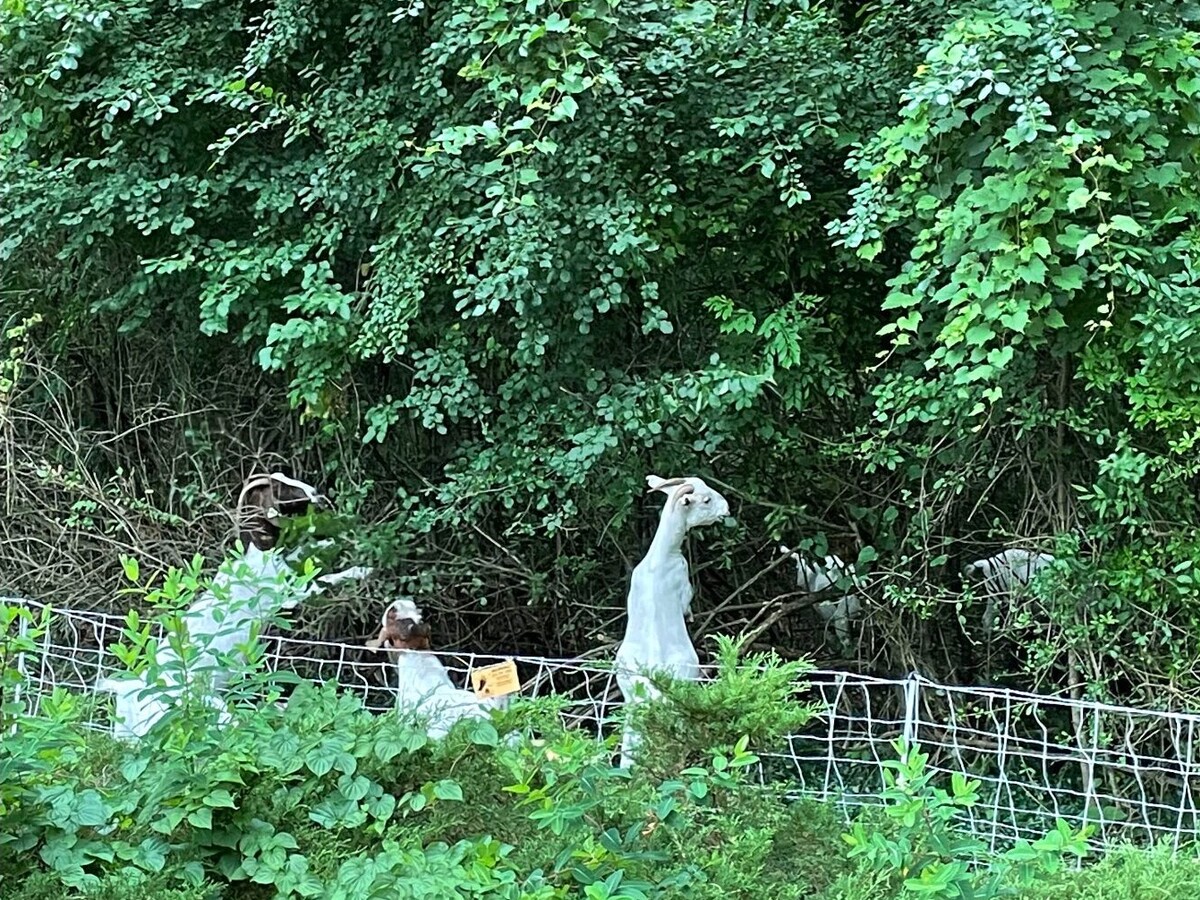 Pulling the vines – photo by Andy Nixon
I'm interested
You must log in to thank, flag, or reply
I disagree with this
This is unverified
Spam
Offensive
Help preserve local news. Support The Sun Times News.