Caleb Nash Johnson Helmer, a 16-year-old of Saline attends Saline High School, and keeps busy as the trimester approaches, and local kids are in need of school supplies. “This year, the organizers of Stuff the Bus, requested subdivision captains,” said Helmer, “Being the Captain for Stuff the Bus is such a rewarding experience.” In addition to being a captain for Stuff the Bus, Helmer helped raise over $1,000 dollars for supply needs dedicated to students in the area. Stuff the Bus held their annual donation drive from July 19th- Aug. 12th and reached a total of 15 stops including community centers and local businesses.

The items are collected by volunteers and provided to each location as a pickup center for students in the community. Stuff the Bus has been a successful drive for students in Saline and is made possible by the partnerships of Saline Area Social Service, Steadfast Chiropractic and Summerfest. The event is also supported by local businesses and their owners. The dedicated Helmer was a major player in collecting and dropping off supplies for the event, “He was one of the biggest volunteers in his neighborhood,” said Patient Advocate Libby Perrington of Steadfast Chiropractic. Two years ago, Steadfast Chiropractic joined the efforts, “It’s incredible, and continues to grow” said Perrington.

Though the event is becoming well known to the area, Helmer took it a step further and pushed the promotional bull to the finish line, as he promoted strategies to raise awareness around his neighborhood, “I created and dropped off flyers to the neighborhoods, and asked neighbors to post on their Facebook group pages,” said Helmer. Local businesses and academic professionals championed the young philanthropist and shared his efforts on social media, “This amazing young man, Caleb Helmer, has been out raising money and collecting donations…'' was read from Brewed Awakenings Twitter page and shared by Hornet Baseball of Saline.

Caleb Helmer comes from a fourth generation of Saline natives, “My father grew up in Saline, and my mother grew up in Britton,” said Helmer, “I get a lot of inspiration from my dad who has helped raise millions of dollars for charitable organizations.” According to Caleb, his grandparents also worked with numerous organizations, and presently the Helmer family work on continuing that legacy, “My family believes in giving,” said Helmer, “My father is an auctioneer and conducts benefit auctions for many charities, my mother has served on boards and raises funds, my sister served as a Student Representative on SASS...we believe in lifting people up.”

The young compassionate student saw an area for growth, and despite his upcoming busy school schedule, decided he could help make a difference. “Caleb took Stuff the Bus to heart,” said Paul Hynek from Saline Summerfest. In recent years, Summerfest would park near the event location, and in 2021 the decision was made to move into the school district neighborhoods and collect supplies. “The goal is to be sure that no Saline Area Schools student or staff member starts the school year without adequate supplies,” said Hynek, “this removes one less worry on the minds of the students, their parents and staff.”

Alongside volunteer work and home life, Caleb allocates his athletic commitments, such as baseball and tennis, “I came to realize very quickly how important team sports were to me,” stated Helmer, “there really is a special bond – a brotherhood that pushes me to be a better version of myself,” says Helmer who’s been playing baseball since he was 6 years old.

Caleb was not handed an easy card in the early stages of life, as he was born with Craniosynostosis, a condition in which an infant's bones are fused together on the skull prematurely. Caleb had his first major surgery when he was 9 months old, which caused infections and numerous life-threatening complications, “I almost died after my first corrective surgery and it led to many more surgeries” said Helmer, “I am grateful to be alive and, in a position, to help.”

This old soul shared with STN that he hopes to eventually help the University of Michigan in their efforts for children within the Pediatric Plastic Surgery Department and is already in those early stages of communication. Helmer made a heavy impact on the Saline community, and his service to Stuff the Bus was prodigious, “Seeing first-hand the generosity of our community was quite powerful,” said Helmer. It’s safe to say that Caleb has a rewarding future ahead of him, and he will start to apply to colleges next summer, “I am open to staying in Michigan or attending college out of state with possibly a business major”, said Helmer “Volunteerism and being someone in my community can count on will always be a big part of who I am.” 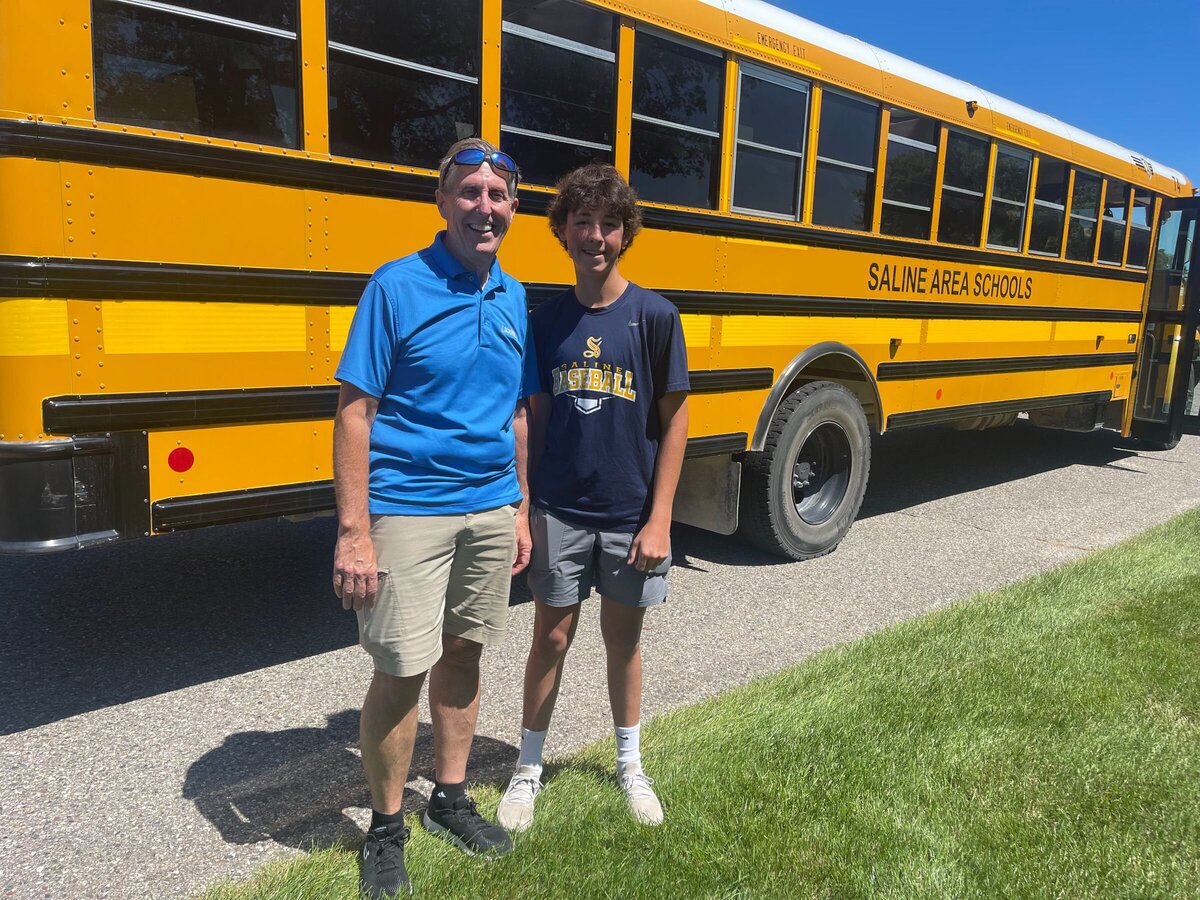